TWELVE-YEAR-OLD LUCY WAS SO AFRAID OF THE MAN WHO HAD GROOMED HER FOR SEX THAT SHE STARTED SLEEPING WITH A KNIFE UNDER HER PILLOW.

When her mum Sarah*, of Derby, made the shocking discovery, she thought Lucy was suicidal because of the trauma that she’d been through.

Then it dawned on her that her daughter was actually trying to protect herself.

The 18-year-old man who groomed Lucy also abused two other girls. He befriended all of them on the internet and formed relationships with them.

Sarah, 47, said she clearly remembers when Lucy started going off the rails.

She said: “She was 12 and I was having to be firmer with her, she kept talking about a lad who was over 18. I told her to stay away from him but six months later I knew something was really wrong.

“I immediately contacted the police. He was arrested to protect her and it went to court.

“She thought this man was her boyfriend and that he was good to her. When he was arrested she started sleeping with a knife under her pillow. I thought she was suicidal but she was scared that he was going to come after her, she was trying to protect herself.”

The man who groomed Lucy had sex with one of his victims 35 to 40 times.

He pleaded guilty to 14 counts of sexual activity with a child and was sentenced to two years in a young offenders’ institution at Derby Crown Court in November 2011. 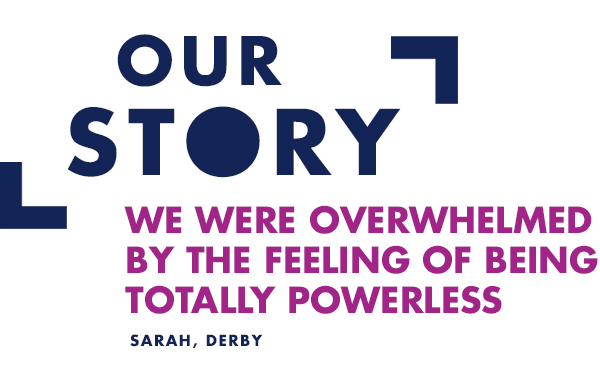 Sarah said that she and her husband, an engineer, were overwhelmed by the feeling of being totally powerless.

Six months after the court case, when Lucy was 13, Sarah said she started experiencing problems again.

Sarah, a former teaching assistant, said: “I found out that she was seeing a lad again and when I asked her about it she told me he was 16.

“I noticed that she was putting on a lot of weight but I thought it was just because of all the trauma she’d been through. But one day she was getting ready for school and I realised she was pregnant.

“She was eight months pregnant by the time I found out. The father was actually 21.

“I found out later that she had met him because he used to hang around with a group of people of all ages on the street and he used to show off his flash car.”

The man was jailed at Derby Crown Court in December 2013 for more than six years after admitting nine counts of sexual activity with girls aged 13 and 14.

Sarah said that it was important to realise that any young person could be affected by child sexual exploitation.

*Name has been changed to protect the parent’s identity

Jane was just 14 when her mum’s boyfriend started to sexually abuse her when they were alone in the house.