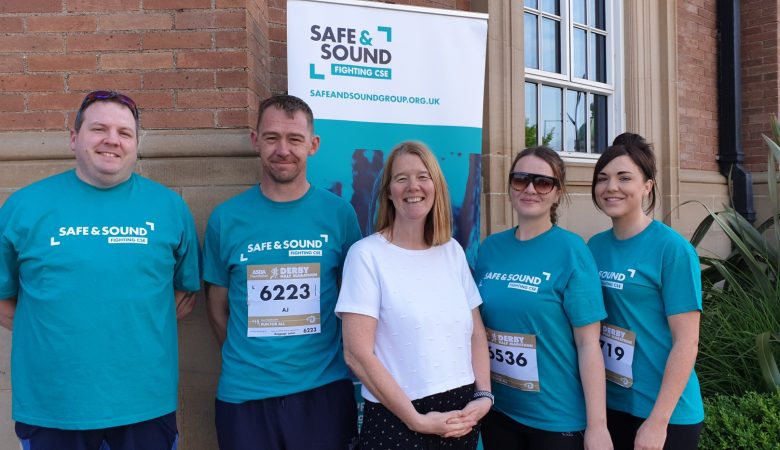 As a small local charity, we rely heavily on the commitment and generosity of fundraisers to be able to reach young people

Five local fundraisers have together raised hundreds of pounds for Derby charity Safe and Sound after completing the Derby Half Marathon.

Their support will help Safe and Sound continue its specialist and grassroots work across Derbyshire that transforms the lives of children and young people who are victims or are at risk of child sexual exploitation (CSE).

Father-of-three Simon Barcz, who started on a fitness drive as part of his lifestyle change to combat Type two diabetes, has completed a number of fundraising challenges but said it was the hardest thing he had ever done.

He now has his sights set on further fundraising challenges for Safe and Sound including the 55-mile Taff Trail from Cardiff to Brecon this summer before attempting his most grueling challenge in November – trekking to the Everest base camp.

Fellow team member Antoni Jones is a supervisor at Derby Express Couriers who are planning a series of events to raise money for Safe and Sound.

“I finished in two hours 35 minutes and was exhausted but it was really worth it to know we have raised money for this incredible charity.”

Colleagues Lauren Duffy and Talia Anthony, who both work with children and young people, crossed the finishing line together and said that their passion for the work that Safe and Sound do help them get through the last couple of miles.

Final team member was Greg Holden who entered the event for a new challenge.

The team was met ahead of the start line in Derby’s Cathedral Quarter by Safe and Sound Chief Executive Tracy Harrison.

She said “As a small local charity we rely heavily on the commitment and generosity of fundraisers to be able to reach young people who are at risk and those who sadly have been victims of sexual exploitation.

“We are very grateful to all the members of Team Safe and Sound for entering the half marathon and raising money to support our work across the county.

“Events such as this are important to raise the profile not just of our work but of the whole issue of child sexual exploitation.  Research shows that one in 20 children and young people are at risk of sexual abuse which includes sexual exploitation.

“It is therefore vital that everyone is aware of the dangers facing young people in our local communities every day – particularly in this digital age with perpetrators increasingly utilising the internet to groom their victims.”