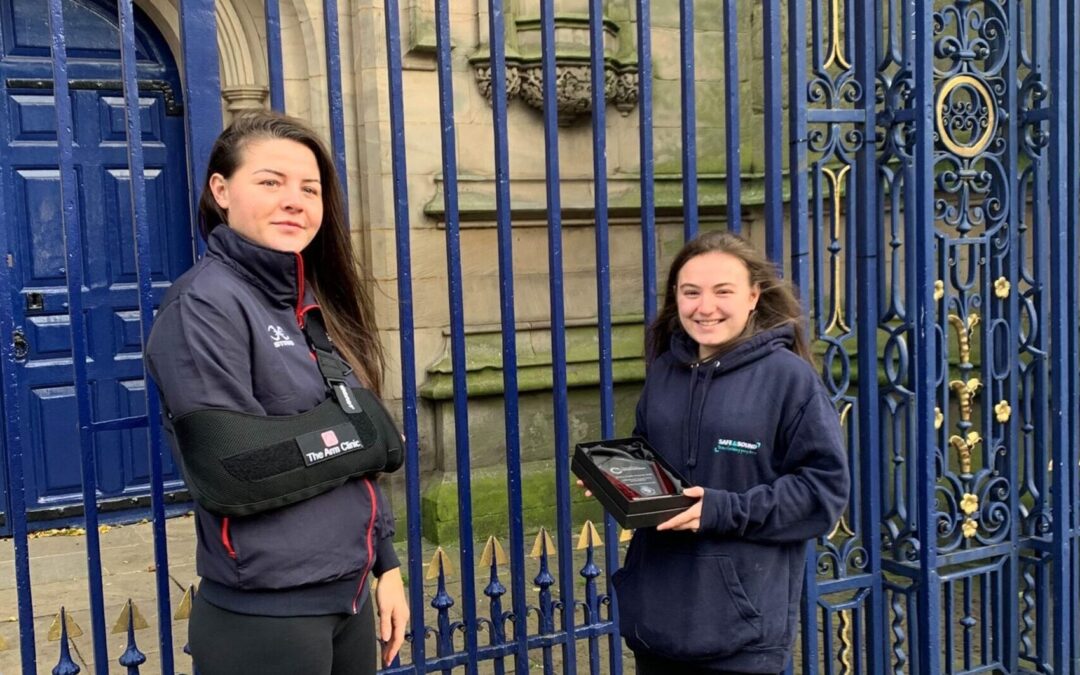 A 19-year-old girl who has survived child exploitation and is now an ambassador for specialist local charity Safe and Sound has been recognised at the second annual Derby Youth Awards. Louise Murphy-Fairclough has been presented with the Inspirational Young Person Award in the awards programme organised by Sporting Communities and sponsored by Derby City
Council. Louise has turned her life around with the support of Safe and Sound who nominated her for the award as a positive role model to other children and young people across the county who are victims of or at risk of child exploitation.

She targeted online by men pretending to be teenagers who bombarded her with indecent images and persuaded her to do the same through systematic online grooming. The police investigated and prosecuted two of them but then her Facebook account was hacked and photos of her shared with all her contacts – prompting friends to turn their back on her and leading to Louise starting on a destructive path of self-harming. Louise was referred to Safe and Sound and, with the help of her support worker, has been able to start rebuilding her self-esteem and confidence.

As well as being an ambassador for the charity, she is a volunteer youth worker whilst starting her studies to become qualified in the role. She has also fronted fundraising campaigns for Safe and Sound, been part of national training and awareness-raising programmes and has helped create appropriate support and resources for both young people and professionals. Louise said: “Safe and Sound saved my life and I have wanted to share my story and also work with the charity to help other children and young people who have been through similar experiences to my own and to better protect others who are at risk of grooming and exploitation both online and in their local communities.

“I am really honoured to have been given this award and I hope that it helps to break down the taboos surrounding child exploitation and raise awareness amongst young people and
their families about the dangers they face.”

Safe and Sound chief executive Tracy Harrison said: “We are so proud of how far Louise has come. “The mental scars of online grooming will never be eradicated but Louise is determined to
put something back into her local community and work with young people who are vulnerable to exploitation. “Child exploitation includes sexual, County Lines, trafficking, Modern Slavery and
radicalisation and is sadly on the rise. It can affect any young girl or boy regardless of where they live, their family situation, cultural or social background. “As the county’s only specialist charity, we provide a range of support for an increasing number of young people and their families and also work across local communities to raise awareness of the issue. “Louise’s role as an expert by experience is a vitally important one and I am delighted that her bravery and determination has been recognised with this award.”

For more information about support the work of Safe and Sound and ways to support the ongoing Butterfly Appeal, please visit https://safeandsoundgroup.org.uk

Formed in 2002, Safe and Sound is an inspiring Derbyshire charity that transforms young lives affected by child exploitation with innovative, hands-on programmes.
The charity works at grass root levels delivering individual support to each child as well as families and carers. This vital support enables them to move not just to a place of safety, but emerge
unshackled and undefined by their experience and enabled to reach their full potential. The charity continues to specialise in child sexual exploitation and is now developing its services to
support children and young people facing or at risk of wider exploitation which are often interlinked. These include physical and emotional violence, neglect, modern-day slavery, radicalisation and
human trafficking, domestic abuse, missing episodes and County Lines.

Safe and Sound is led by former police superintendent Tracy Harrison with the support of a specialist team; an experience board of Trustees and now a team of Ambassadors who are helping to raise the
profile of the charity and the issue of child exploitation. Safe and Sound’s expertise came to the fore during the 2010 landmark case – Operation Retriever –
which was Derby’s first prosecution for child sexual exploitation and abuse. The charity’s specialist team supported every young person affected by the criminal actions of 13 defendants who were
jailed in total for up to 22 years for 70 offences.