Ambassadors Fly The Flag For Safe and Sound 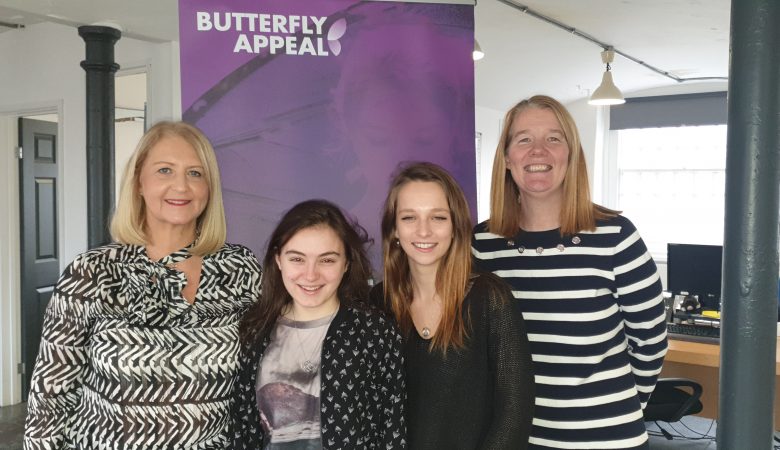 As well as highlighting the charity’s work amongst their own networks, they have pledged to support the charity’s Butterfly Appeal.

The appeal is underway to fund Safe and Sound’s new and innovative support programmes for children and young people across Derbyshire who are victims of or at risk of child sexual exploitation (CSE) and their families.

The group also includes Young Ambassador Louise (18) who has been supported by Safe and Sound after being targeted by online groomers.  The teenager has already shared her story in the hope of encouraging other young people to improve their privacy settings online and her future input will include raising awareness of CSE and the charity in local communities.

Safe and Sound chief executive Tracy Harrison said: “Talking about child sexual exploitation is not an easy conversation but it is vital that everyone is aware of the dangers facing our children and young people both online and in our local communities.

“It is therefore vital that we raise awareness of this issue across our wider communities and our Ambassadors have an important role to play in spreading the word.

“We are extremely grateful for their support and I also hope that raised awareness will also encourage more groups, businesses and individuals to support our Butterfly Appeal so that we can further expand the range of support available for young people across Derbyshire and their families.”

Derbyshire Chief Constable Peter Goodman has been an advocate for Safe and Sound for many years.

He explained: “Safe and Sound opened everyone’s eyes to what was happening in the city when a number of vulnerable and exploited young girls were being repeatedly raped by a group of men, shared with others and trafficked outside Derby in order that they could be raped again.

“Since Operation Retriever, they have continued to change the lives of so many young people and that is why I support them.”

Shaun Barker added: “CSE is something that affects young people and their families from all walks of life – regardless of where they live, their family situation, cultural or social background.

“That is why I am keen to support Safe and Sound in any way that I can alongside our work through the Shaun Barker Foundation which my family and I set up in 2014 to give back to the community that had been so good to us.”

Actor Molly Windsor, who lives in Derbyshire, said: “Having played the real-life character of 14-year-old Holly Winshaw in the television programme ‘Three Girls’, I felt really strongly that I wanted more people to know about, understand and talk about child sexual exploitation.

“By being more open about the issue and working with Safe and Sound, hopefully more children and young people who are being manipulated in such a horrendous way can be helped sooner.”

Amanda Strong, who owns Mercia Image Print in Little Eaton continued: “We must work together to raise awareness and highlight the dangers of grooming and sexual exploitation to young people – especially online.

“This will hopefully ensure that more young people and their families seek out the help and support they so desperately need and the protection they deserve.”

Young ambassador Louise concluded: “Safe and Sound saved my life.  They helped me realise that I was not to blame for what had happened and that I had been groomed.

“Once I realised this I was able to start to re-build my self-esteem and confidence.  My support worker gave me the strength to pick myself up and get on with my life so that my mental scars could start to heal.

“I hope that, by sharing my story, young people and their families will wise up to using privacy settings on social media and only accept people that you know as friends because people like this are far from that.”

For more information about child sexual exploitation, Safe and Sound Derby and the Butterfly Appeal please visit www.safeandsoundgroup.co.uk and follow on social media. A powerful video outlining young people’s experiences and why local people and businesses should support Safe and Sound is online at https://youtu.be/xjcb1y2cfGE

CSE is a particularly manipulative form of abuse and is also linked to wider child exploitation issues such as County Lines, gangs, trafficking and modern slavery.