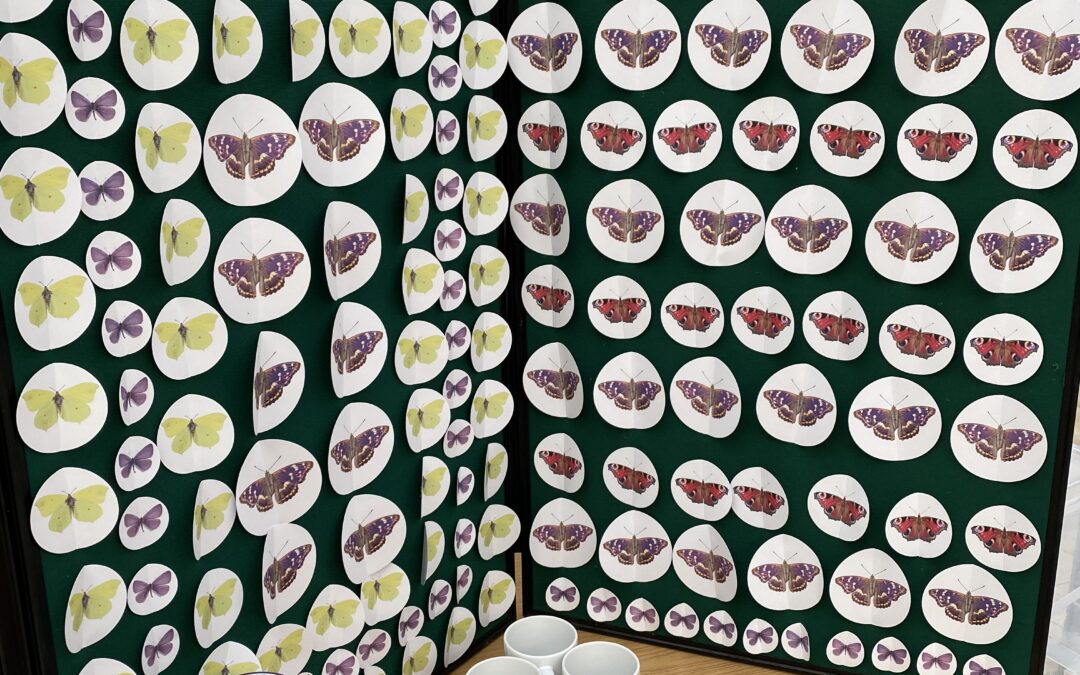 Derbyshire’s specialist child exploitation charity Safe and Sound have submitted detailed evidence to Guinness World Records in their bid to become a record breaker for the ‘largest display of butterfly replicas’. 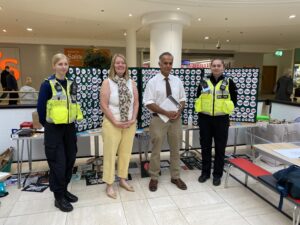 The world record currently stands at 720 and Safe and Sound has submitted written and visual evidence to Guinness World Records in the hope of joining the thousands of other individuals and groups who have been officially recognised over the decades for their feats and endeavours.

Visitors to the Safe and Sound stand on Saturday were able to be part of the world record attempt by buying copies of the beautiful butterflies for themselves – designed and printed by Safe and Sound supporters Mercia Image Print.

Several local companies have also bought a larger butterfly with their company logo emblazoned on one of the wings to show their support.

Meanwhile families joined craft activities to make butterfly masks and talked to the Safe and Sound team to learn more about the grooming dangers facing young people in local communities and online.

Thanks to the generosity of the public and the support of main sponsor, personalised giftbox company Colleague Box, more than £3,600 has so far been raised to help take the charity to the next phase of its successful Butterfly Appeal.

Safe and Sound CEO Tracy Harrison explained: “One of my favourite television programmes as a child was watching Roy Castle and the team on ‘Record Breakers’ and it is very exciting to think that we may make that official log in the coming weeks.

“We are so grateful to the amazing companies and individuals who have supported us in this world record attempt.

“It was also the perfect opportunity to be able to talk to more families about child exploitation and particularly about how they can better protect their children and young people from online grooming by strengthening privacy settings on social media and gaming accounts.”

Safe and Sound first launched its Butterfly Appeal in June 2019 to enable it to expand the breadth and scope of its work to support and protect children and young people across Derbyshire who are victims of or at risk of child exploitation as well as supporting the wider family and raising awareness in local communities.

The appeal has since garnered wide ranging support from individuals, groups and businesses across the city and county – enabling the charity to support more than 300 young people; 60 families and to engage with over 1,000 people to raise awareness of the dangers in the past two years alone.

These include children aged as young as seven upwards who are victims of or at risk of child exploitation which includes sexual exploitation, online grooming, county lines, trafficking, modern slavery and radicalisation.

The next stage of the Butterfly Appeal will focus on such specialist work as psychological therapy programmes – identified as even more important due to the pressures on young people’s mental health services post lockdown.

Mrs Harrison continued: “The serious message behind this event was that young people are, today, at even greater danger of child exploitation.

“This is borne out in the fact that our workload has doubled over the pandemic as perpetrators have taken advantage of young people’s isolation and particularly their increased use of social media and gaming sites.

“Lack of privacy settings and lack of awareness about grooming and exploitation has made young people even more vulnerable to perpetrators looking to draw victims into heinous sexual activity, drugs crime, modern slavery and radicalisation.”

Natalie Bamford, managing director of personalised giftbox company Colleague Box continued: “Safe and Sound is one of the key charities that we have supported since launching our company just over a year ago.

“We have helped them buy a mini bus which is crucial to getting the charity back into local communities and I am so pleased that we have been able to support them with this fantastic world record attempt.”

Amanda Strong from Mercia Image Print is also an ambassador for Safe and Sound.  She concluded: “There was a real buzz around the event at the Derbion and we are delighted that people loved the butterfly designs.”

It is still possible for individuals, families and businesses to be part of the world record bid by visiting https://www.safeandsoundgroup.org.uk/2021-support-ideas/.