Charity Chief Executive Returns To Her Roots As Guest of Honour 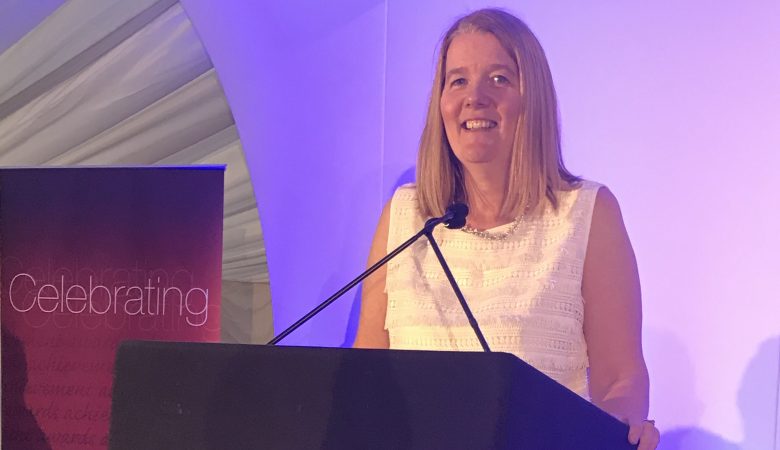 Tracy Harrison recently retired from Derbyshire Constabulary after a 32-year career with the Force.

Last month, she was appointed to take the helm at Safe and Sound which is dedicated to transforming the lives of children and young people across the county who are victims or at risk of child sexual exploitation (CSE).

Mrs Harrison gave the keynote speech at the awards ceremony held at the Pattonair County Ground this week – highlighting the importance of Safe and Sound’s work and their plans to expand the scope of their work.

She was also presented with a Chief Constables Commendation herself by Chief Constable Peter Goodman for her work as Superintendent relation to the investigation and subsequent conviction of Anthony Dealey for rape, attempted murder, sexual assault and robbery after attacking a woman in Ilkeston 18 months ago.

Mrs Harrison said: “Safe and Sound’s work is focused on supporting young people to move forward with their lives and to breaking down the taboos surrounding the issue of CSE which can be hard to discuss.

“Our relationship with Derbyshire police is vital in this work and the Chief Constable is a passionate ambassador for the work that we do.

“It was therefore a great honour to be invited to this wonderful event and to highlight the values that Safe and Sound share with Derbyshire police to protect people in our local communities.

“I was also honoured to receive an award as part of the diligent team who investigated this horrendous crime and brought the perpetrator to justice.

“Having worked in law enforcement and community protection for so many years and ultimately beingthe Force’s lead on children and young people, I am relishing this opportunity to expand the remit of Safe and Sound’s work.

“Our focus now is to secure funds to enable us to support even more young people, their families and local communities across the county. We look forward to the continued support of the police in achieving our goals.”

For more information about Safe and Support can help and how to support the charity’s work in Derbyshire, please visit www.safeandsoundgroup.organd follow on Facebook and Twitter @safeandsoundgroup

The key factor is that individuals or groups take advantage of young people by manipulating or deceiving them into sexual activity in exchange for something the victim needs or wants.

This could range from money and alcohol to less tangible things such as the attention that they crave at a vulnerable time in their lives.

Safe and Sound was launched in 2002 and is the only local charity that is totally focused on transforming the young lives of thousands of children and young people who are victims or are at risk of child sexual exploitation across Derbyshire.

Safe and Sound’s specialist team provides individual support for children and young people aged up to the age of 18.

They also raise awareness of the issue and the dangers facing children and young people through awareness programmes for schools, organisations, businesses and community groups.

Safe and Sound’s expertise came to the fore during the 2010 landmark case – Operation Retriever – which was Derby’s largest prosecution for child sexual exploitation and abuse.  The charity’s specialist team supported every young person affected by the criminal actions of 13 defendants who were jailed in total for up to 22 years for 70 offences.

The charity actively raises funds to support its current work and expand the grass roots services across the county.