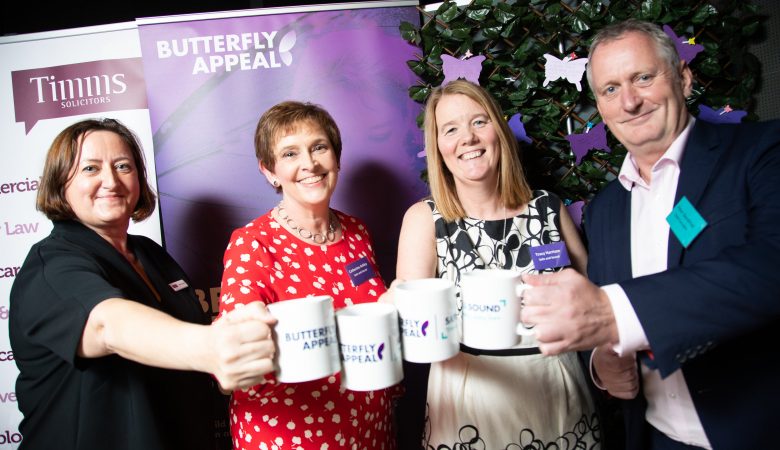 Local charity Safe and Sound has unveiled innovative plans to expand its work that supports and protects children and young people from the devastating damage that sexual exploitation has on their lives.

Safe and Sound, established since 2002, is the only local charity focused on transforming the lives of children and young people who are victims of or at risk of Child Exploitation, commonly referred to as CSE.

Having already worked on an individual basis with hundreds of children and young people across Derbyshire, Safe and Sound now wants to provide additional support programmes for young people, their families and wider local communities.

To brings these plans to fruition, the charity has launched the Butterfly Appeal #BuildingStrongerWings which will be a year-long programme of activity to raise funds and increase awareness of CSE.

At the Butterfly Appeal launch event, which was hosted by QUAD and sponsored by Timms solicitors, Safe and Sound chair Catherine Arkley outlined how the charity was building on its grassroots, victim-focussed approach to transform the lives of young people in Derbyshire.

Mrs Arkley said: “Sexual exploitation is a hidden, heinous crime. Young people often don’t understand that they are being exploited or are too scared and possibly ashamed to tell anyone what is happening.

“Our vision of is to support young people to move not just to a place of safety, but emerge, like a butterfly, unshackled and undefined by their experiences and enabled to reach their full potential.”

Safe and Sound Chief Executive Tracy Harrison continued that, in the UK today, one in 20 children suffer sexual abuse which includes child sexual exploitation.  That means that in every classroom in Derbyshire, there is at least one vulnerable young person in need of help.

She said: The timing of this launch reflects the growing need for our services as young people are more vulnerable than ever to sexual exploitation, through to wider exploitation with county lines and cyberbullying as just two examples.

“Our young people need more protection than ever and Safe and Sound is the only organisation working on the ground here in Derbyshire, providing practical help and support.

“We are largely reliant on raising the financial support from the generosity of the Derbyshire community and that is why we are launching the Butterfly Appeal. The theme has been inspired by the young people we help.

“We are inspired by their bravery, finding the strength to come out of a dark place and make changes in their lives that transform their futures.

The work of Safe and Sound was commended by Derbyshire’s Chief Constable Peter Goodman who said: “Safe and Sound are the organisation that has changed the lives of many young people who have been sexually exploited, raped and trafficked by perpetrators and helped countless others who have been at risk of such criminal behaviour.

“I first became aware of their work when I came to Derbyshire in 2007 and they came to me with their evidence and intelligence about CSE that was happening across Derby.

“That is why I am supporting them throughout my tenure as Chief Constable and I would appeal others to get behind the Butterfly Appeal that will provide vital support to victims, their families and wider communities across the county.”

Timms Partner and Childcare solicitor Tessa Dunleavy said: “Timms has a wealth of knowledge and experience within the family justice system and represent, children, young people and parents who have been exposed to sexual exploitation in one way or another.

“We are part of the wider network of agencies including police, children’s services and healthcare providers as well as the court system who are all involved in the issue of sexual exploitation.

“The ethos of agencies working together has never been more important if we are to truly tackle this issue and I believe that the Butterfly Appeal will enable Safe and Sound to make an even greater positive difference to people’s lives.”

A powerful video outlining young people’s experiences and why local people and businesses should support Safe and Sound was unveiled. https://youtu.be/xjcb1y2cfGE

Guests also saw a video message from actor and Safe and Sound ambassador Molly Windsor who won a BAFTA for her portrayal of one of the Rochdale CSE victims in the television drama ‘Three Girls’.https://youtu.be/4IeIie69yXM

Guests were invited to share a message of hope for young people on the Butterfly tree and left the event with mugs and information on future fundraising events which were circulated by Derbyshire Police Cadets.

QUAD CEO and Safe and Sound trustee Adam Buss concluded: “The event shared the grim reality of how CSE affects far too many local children and young people, their families and the wider community.

“However, I know that everyone left uplifted by the inspirational work that Safe and Sound is planning and ideas for how we can all help this vision to become a reality by supporting the Butterfly Appeal.”

For more information about Safe and Support can help and how to support the charity’s work in Derbyshire, please visit www.safeandsoundgroup.org and follow on Facebook and Twitter @safeandsoundgroup

For more information about child sexual exploitation, Safe and Sound Derby and the Butterfly Appeal please visit www.safeandsoundgroup.co.uk and follow on social media.

CSE is a particularly manipulative form of abuse and is also linked to such criminal exploitation issues such as County Lines, gangs, trafficking, and modern slavery.