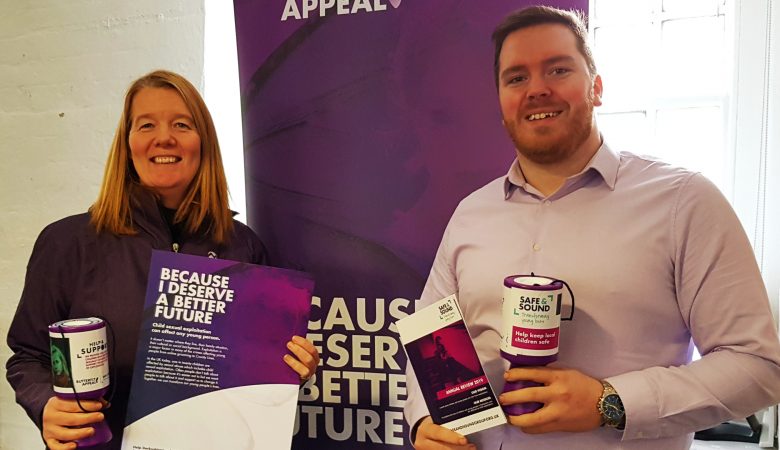 A local charity is asking everyone to wear something purple on Wednesday March 18 to mark National Child Exploitation Awareness Day and focus attention on the dangers facing children and young people of being groomed both online and in local communities.

Safe and Sound is part of the NWG national network which spearheads the awareness-raising day every year and #CEADay20 aims to highlight the rising tide of child exploitation including sexual exploitation, coercion to run drugs through County Lines, trafficking and modern slavery.

Businesses, organisations and schools are being asked to pledge their support for Safe and Sound on the day – donating at least £1 each and wearing something purple.

Funds raised will go to the charity’s Butterfly Appeal to expand services that protect and support young people across Derbyshire who are victims of or at risk of exploitation and their families.

Safe and Sound is also offering training packs to schools for teachers to deliver in lessons and tutorials throughout the week to raise awareness of exploitation amongst young people.

Safe and Sound chief executive Tracy Harrison explained: “Child sexual exploitation – whether that is bribing young people to share indecent images online or grooming them to be raped and abused – remains one of the largest forms of child abuse in the country.

“Last year saw an all-time high of 18,000 children and young people being groomed and sexually exploited in the UK and research by the NSPCC also suggests that more than 200,000 secondary school children in the UK have received or been asked to send explicit messages or images online.

“The actual figures are likely to be so much higher as young people are often too scared to reveal what is happening to them and some even blame themselves for the abuse.

“Equally worrying is the rise in the wider criminal exploitation of young people such as County Lines with young boys and girls being forced into drugs operations and there is a growing incidence of trafficking and forcing young people into modern slavery.

“Whatever the motives of perpetrators, child exploitation can potentially destroy the lives of any young girl or boy – regardless of where they live, their family situation, cultural or social background.”

She continued: “As the local charity dedicated to supporting children and young people across Derbyshire who are vulnerable to or victims of grooming and exploitation, we always support National Child Exploitation Awareness Day.

“Over the past 18 years we have supported hundreds of young victims to understand what has happened to them, rebuild their confidence and move to a place of emotional safety – protecting themselves from further harm.

“We are therefore asking individuals, businesses and schools both to raise funds for our vital work in local communities and to raise awareness of the dangers that young people face.

“At the very least, I hope that #CEA2020 strikes a chord with both young people and their families that they particularly need to set stringent privacy settings and be careful of who they talk to online.

“However, everyone needs to be aware of the wider exploitation facing young people.

“This can start with a seemingly friendly chat in the local park on the way home from school then regularly meeting up and accepting gifts before spiralling out of control and being blackmailed into far more sinister activities.

“To make a difference, we need to share your knowledge and educate, speak out and encourage others to join us in the fight against exploitation.”

For more information about child exploitation, how Safe and Sound can help and how to support the local charity, please visit www.safeandsoundgroup.org.uk or follow on social media.