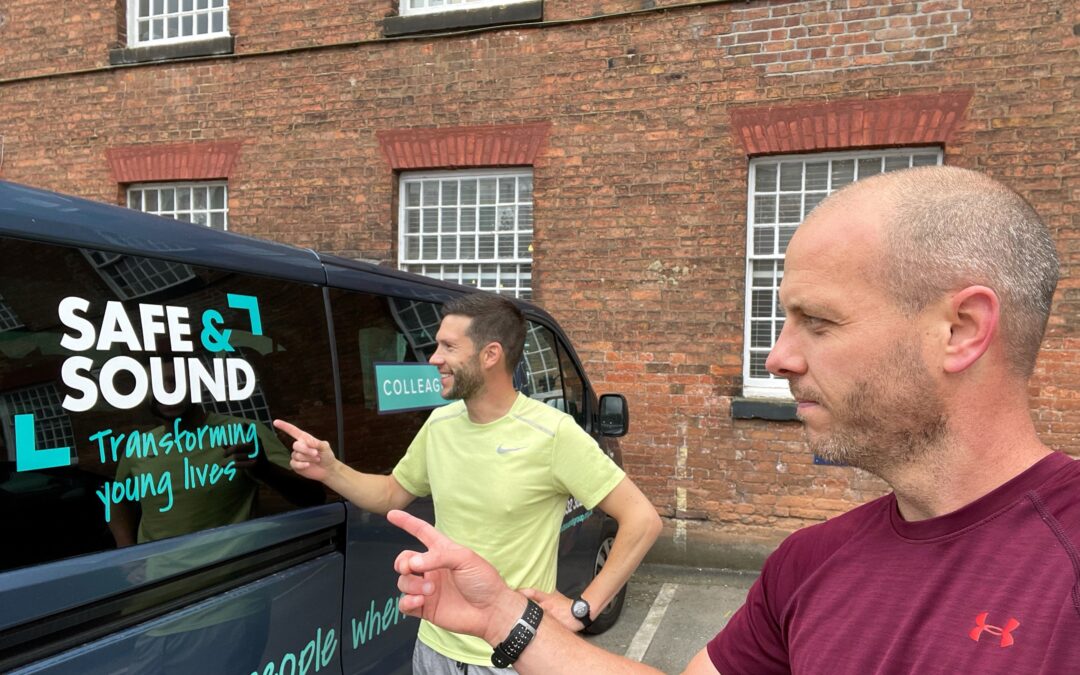 Childhood friends Anthony Lomas and Mark Wallace have mapped out a 26.2 mile route from Chatsworth to Safe and Sound’s offices in Darley Abbey.

Anthony is a partner at Boxall Brown and Jones estate agents who, alongside sister company BB&J Commercial, have adopted Safe and Sound as their charity of the year.

He will be taking part in the virtual marathon alongside best friend and running mate Mark Wallace who is a key account director at Reach plc.

Also taking part is Nick Fairbrother (40) from Mickleover who is PE lead at a city primary school who last ran the London Marathon in 2010.

All three are upping their training over the coming weeks in preparation for the 26.2 mile virtual London Marathon which will see 50,000 participants tackling a course of their choice at their own pace on Sunday October 3 – logging their route and times on a dedicated app to qualify for a medal.

The virtual marathon will run alongside the actual event in the capital which will see a record-breaking 50,000 elite, amateur and charity runners tackling the course between Blackheath and The Mall.

Anthony and Mark (both aged 40) first met at playschool, attended Walter Evans and Ecclesbourne schools together and have been firm friends ever since.  Anthony chose Mark to be best man at his wedding and Mark is godfather to Anthony’s young son.

As well as spending time together as families, both run together at least three times a week and, over the years, have competed in a wide range of events from 5k to full marathons.

Mr Lomas said: “I have taken part in the London Marathon before and Mark has run the Oslo Marathon in Norway but we have always fancied running one together.

“Boxall Brown and Jones support Safe and Sound so we decided to enter the virtual London Marathon this year under this fantastic local charity’s banner and raise awareness and money for them at the same time.”

On Sunday October 3, they will be dropped off at Chatsworth and run 26.2 miles back to Safe and Sound’s offices in Darley Abbey Mills – close to where they both live.

Mr Wallace continued: “The A6 may sound like a boring route but it takes in some stunning views and world heritage sites and closely follows the River Derwent which is a beautiful backdrop.

“We train together all the time and talk absolute rubbish when we do so decided we may as well carry that on for three hours instead of one.

“There is an option to split up the mileage across a 24-hour period for this virtual event but we plan to run the whole route in one go.  Other than the mental and physical challenge of a marathon on our 40-year-old bodies – it should be a walk in the park – or rather a run on the road!”

Meanwhile Nick Fairbrother decided to support Safe and Safe where his uncle works alongside a team of volunteers.

He said: “I know just what an amazing job this charity does to support young people and their families across the county so was keen to fly the flag for them.

“Having run for many years, I have been recovering from a heel operation which has flared up from time to time but I am confident that I can power through and have been building up the miles to get back to being marathon-fit.”

Tracy Harrison is CEO of Safe and Sound which supports children and young people across Derbyshire who are victims of or at risk of child exploitation including online grooming, sexual exploitation, trafficking, drugs lines, modern slavery and radicalisation.

The charity also supports the wider family and raises awareness in local communities of the dangers facing young people.

She said: “We are very grateful to Anthony, Mark and Nick for stepping up to take part in the Virtual Marathon and raise money for us.

“We will be cheering them back to Darley Abbey Mills and hope that they breeze over the finishing line for a well deserved drink and snack.

“The serious message behind their wonderful enthusiasm and energy is that we desperately need money to support more young people across Derbyshire.

“We support and protect a growing number of children aged as young as seven who are targeted online and in person by perpetrators looking to criminally exploit them for their own purposes.

“We are also working with a growing number of families who are affected by exploitation as well as re-launching an extensive awareness-raising programme, now that we are able to attend groups and schools, to ensure people know about dangers facing young people in our local communities.”

For more information about the work of Safe and Sound and how to support the charity’s work, please visit https://www.safeandsoundgroup.org.uk