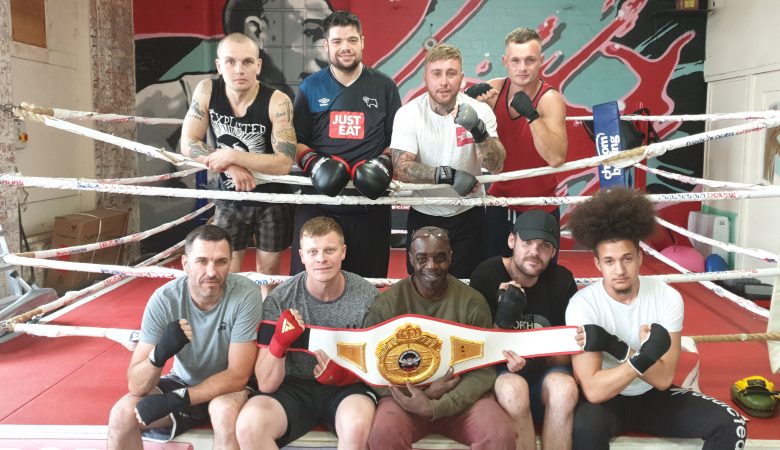 A group of amateur boxers are hoping to emulate the immortal words of sporting great Mohammed Ali and float to their fundraising target to support local charity Safe and Sound’s Butterfly Appeal.

Ten charity boxers have chosen to support the long-established charity’s plans to expand the support it provides for children and young people across Derbyshire who are victims of or at risk of Child Exploitation (CSE).

They are among a 25-strong group who have been training at Fearon’s Gym and Boxing Academy in Osmaston Road in preparation for a charity boxing  event on Saturday September 14 at Queen’s Hall in London Road.

Safe and Sound CEO Tracy Harrison added: “Boxing and fitness is all about building confidence and self-esteem and that is just what our specialist team focus on when supporting young people to build stronger wings to transform their lives.

“The fact that everyone is supporting Safe and Sound’s Butterfly Appeal is even more of a fit with this event considering Ali’s immortal phrase ‘float like a butterfly ..sting like a bee!”

“We have recommended this group to support Safe and Sound.  It is a local charity supporting local children and young people which, as a community interest company, is totally in line with what we believe in.”

The prize on the night will be a gleaming championship belt which will be presented to the person who has raised the most for their chosen charity.

In strong contention is Chris Lloyd (32) from Allenton (pictured front second from right) who has already raised well over £1,000 including donations from Eco Drive, Spray Kings, Rapid Home Improvements and city pubs Noah’s Ark, Norman Arms and The Neptune.

He said: “I know a few people who have been supported by Safe and Sound in the past so it was a no-brainer when we were asked which charity we wanted to support.

“I’ve really enjoyed the training for this event and am still working hard to raise as much as I can.”

Dan Howie (32) from Chaddesden (pictured back second from left) will be competing in his third charity boxing event as part of his bid to lose enough weight to have surgery to remove excess skin.

Dan has already shed 26 stone following gastric sleeve surgery and has another 1.5 stone to go before he can stabilise and qualify for the final surgery.

“This has been a long journey but I am nearing my goal and raising money for this great local charity certainly helps to keep you focused.”

One of the oldest participants is Marc Stevens (40) who is Operations Manager at Safe and Sound.  At the last event, he raised £510 for the charity and also won his match in the first round.

He said: “Having raised my fitness levels, I wanted to continue and test myself with a longer bout. We have a great friendly but competitive spirit both in the ring and in seeing which of us can raise the most money.”

Safe and Sound Head of Fundraising Tom Stanyard concluded: “We are very grateful that these charity boxers have chosen to support our Butterfly Appeal.

“With the help of businesses, individuals and groups, our aim is to raise vital funds to help us to support even more young people who are vulnerable to or currently facing sexual exploitation as well as their families.”

For more information about child sexual exploitation, Safe and Sound Derby and the Butterfly Appeal please visitwww.safeandsoundgroup.co.ukand follow on social media.A powerful video outlining young people’s experiences and why local people and businesses should support Safe and Sound is online at https://youtu.be/xjcb1y2cfGE